Good Sunday to you…as we’re drying out from the storm yesterday now we focus our attention on the next one coming in…and this one too could be a doozy in the Plains and the southern Plains. Severe weather, flooding rains and extreme winds are all on the table with this. How KC plays into the storm overall will be figured out…but in looking at the data last night and today…this one may be a memorable one. For the 3rd time this year I’ve had to go and look at the records for historical storms for a month. In March it was the “bomb cyclone” in April it was “bomb cyclone #2) and while this on’t be bomb cyclone #3…it will send air pressures way done in the western Plains…and that is pretty unusual for May! I went and did some research into storms of similar strength and then looked for severe weather…one storm, somewhat similar, was May 3-5th, 1999. That was VERY bad for southern KS and OK.

As a matter of fact we showed the 20 year anniversary of that storm a couple of weeks ago on FOX 4. Moore, OK was devastated by a F5 tornado…there were dozens of others too there and up into southern KS as well. Concerning. I saw a similar storm back in the early 1980s as well when I was doing some research and perhaps into the early 70s (for May at least). These types of storms don’t happen often to the strength at least that this one will have (for the month of May).

There there are some shades of connection to the Bomb Cyclone on 3/12-13 of this year…not totally the same…but shades of “sameness”.

Today: Clearing out and increasingly breezy with highs in the 60s

Tonight: Fair skies and cool with lows in the 40s

Tomorrow: Sunny initially then increasing clouds with rain/storms at night. Highs in the 60° range

Tuesday: Severe weather is possible again…winds/hail are the main threats (especially winds). Highs in the 60s…this could be a weird weather day because the highest severe weather risk may be before 3PM in KC at least.

For OK at least…that may change tomorrow.

For the KC region…we’ve had some marginal set-ups but thus far nothing too bad around these parts…yesterday there was one report of actual severe weather…and IF you follow the blog…you know how pessimistic I had been regarding the risks yesterday locally at least. It was something to watch but there were soooo many red flags about the set-up.

So we ended up with this for severe weather….that one report was up towards Platte City where some power lines were knocked down. 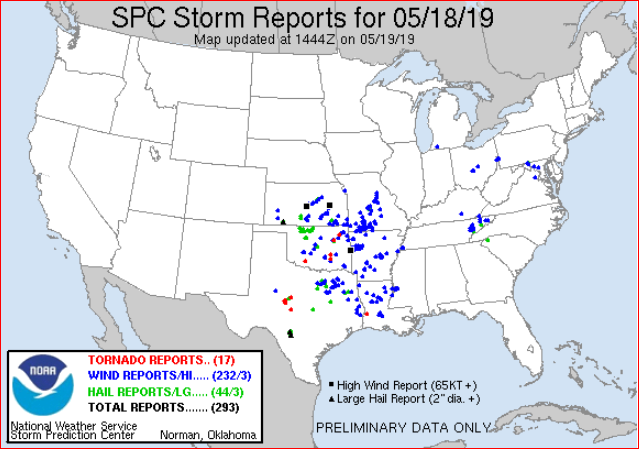 Do you remember on Thursday…maybe it was Wednesday…where I talked about how we’d probably end up with these “marginal” severe thunderstorm warnings…the ones that I’m trying to talk to the weather service about eliminating all-together because their a dime a dozen…well yup. Thankfully though there were only 3 and one of the technically verified I think.

The set-up into Tuesday is a “weird” one locally too…but one that needs to be watched again because of the “weirdness” of the next May storm in the western Plains. What am I talking about?

We’ve gone up to about 18,000 feet or so…to what we refer to as the 500 mb level…to highlight an intense upper level storm in eastern CO.

That storm is unseasonably strong for the latter half of May in my opinion. Some other models send a surface storm of rare low intensity into western Plains region. That’s why I went to look at some of records for lower air pressure in the month of May. It won’t be that strong but I needed to check which tells you something.

The wind fields above us with this storm will be fascinating to track…because the air above us will be blowing from the south to the north (not unusual) but the speeds of the winds will be unusual with winds about 5,000 feet up forecast to be some 60-85 MPH! Now I’ve seen winds that strong on the lower end of that range…but there is some data out there that shows that the winds at that level at least…could be close to 90 MPH! Again that is around 5,000 feet or so.

That is remarkably intense at that level.

So IF there are storms on Monday night…some rather strong wind gusts are possible at the surface…then again as we go a bit farther up into the atmosphere…the storms will be pushed along at close to 65 MPH or so. When the winds are that strong up there and you have convection that churns up the air…it’s not out of the question that you get these strong winds work down to the ground.

Some are talking about the flooding threats for Monday night into Tuesday AM. I’m not as convinced (at least for KC Metro). This might be a better set-up towards NW MO and NE KS. I don’t ever remember a flood scenario locally when storms are potentially moving at 70 MPH.

Then on Tuesday another line of storms will likely come through the region near or just after lunch. This will also need to be watched for additional severe weather risks (wind)…but what is interesting is that the upper level storm goes so far to the NW of the region that there is no real wind shift behind the storm…in other words there is no cold front with this storm that pushes through. I’m not sure how unstable we’ll get with the early arrival of the storms on Tuesday compared to something later in the day. Areas farther east of KC…where the storms come in during a more favored time could see more of a severe weather risk. Then on Wednesday we should be close to 80° with a persistent south wind keeping things rather muggy.

No storms are the same obviously…but there are some shades of 1999 in this system…and that’s why I have concerns for the southern Plains.

Monday, 20 May 2019 still has potential for significant severe weather across portions of the southern Plains.

If you are in this area, no need to panic. Instead, take a few minutes today to think about what you will do tomorrow should severe weather immediately threaten you. pic.twitter.com/YIwimk7E4d 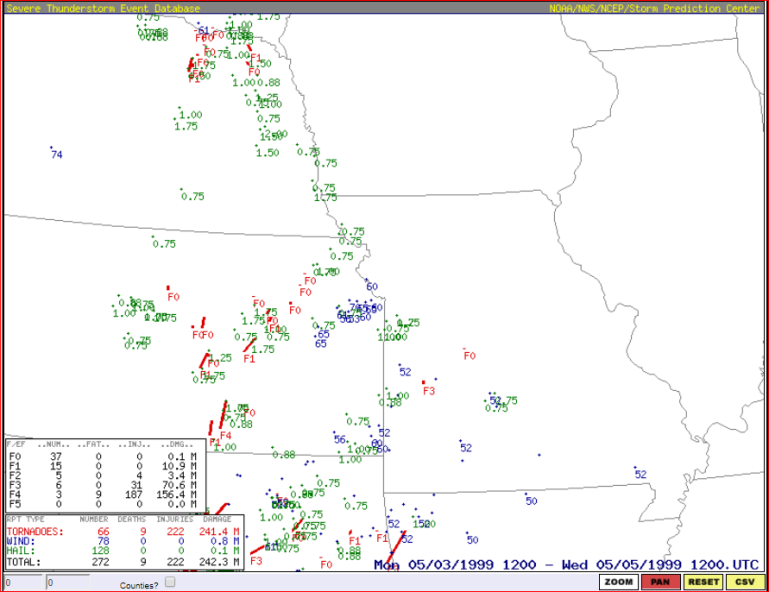 Again OK was hit real bad with all of this back then. 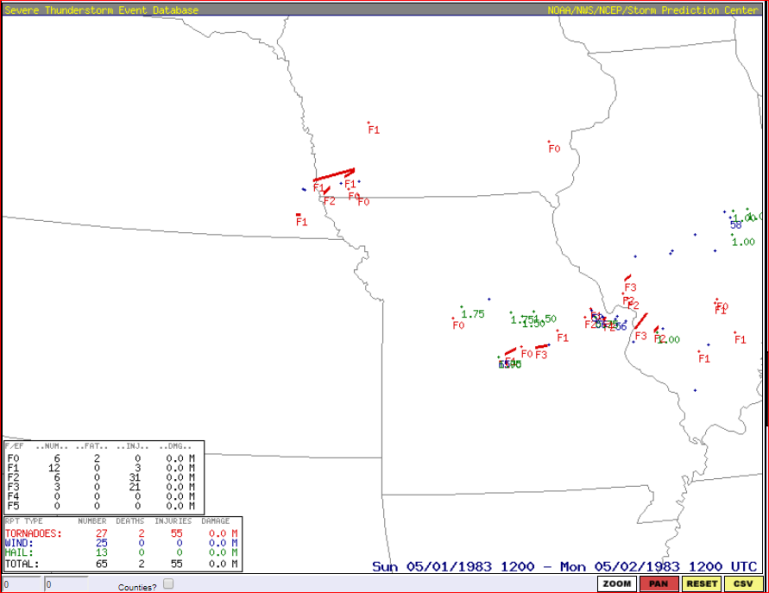 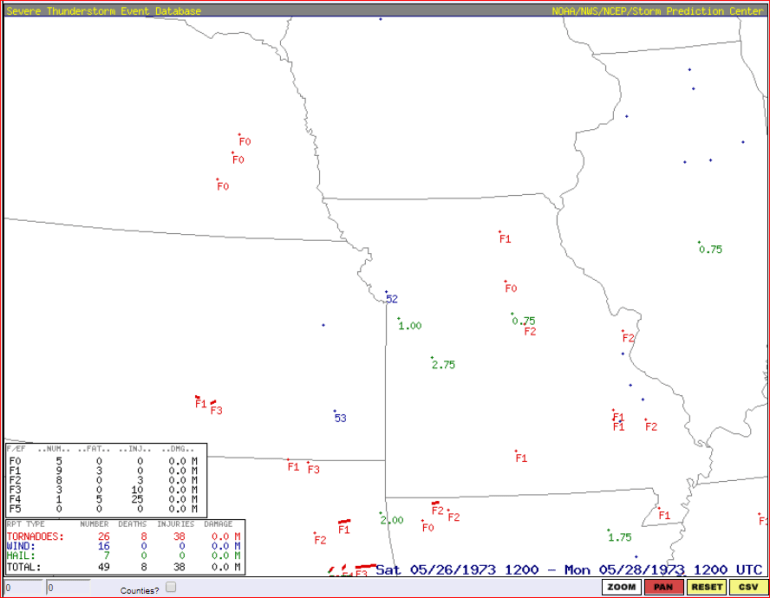 So the bottom line..let’s watch for the severe weather risk…especially gusty winds from the storms…and the potential of flash flooding…although I’m not as convinced of that for the KC Metro area right now.

OK that’s it for now…another blog coming tomorrow morning…enjoy the drier weather while you can.

Our feature photo comes from Justin Grimes up towards Cameron, MO from last week’s storms. 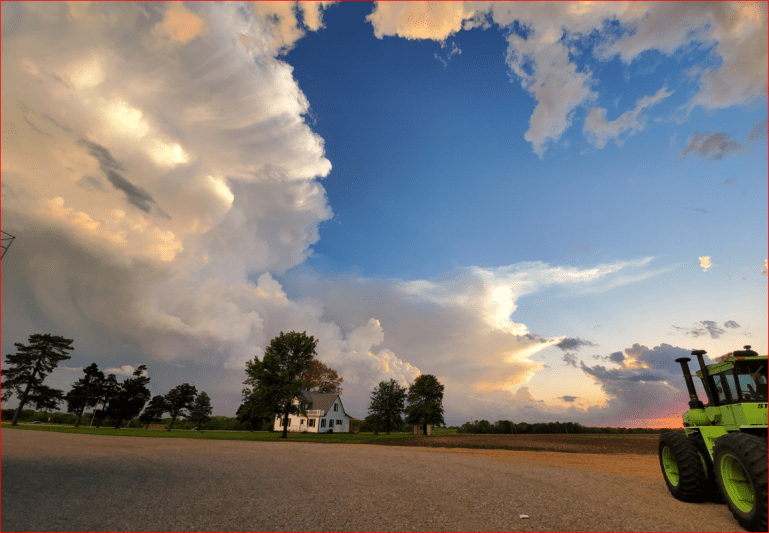