It’s Tuesday and the day is starting very pleasant in the region. Temperatures are warming from the 60s into the 70s but at least for now the dew points, which is a way of measuring the moisture in the air, are still very comfortable but will be getting more uncomfortable as the day moves along. I’ve noticed that the model data appears to be overdoing the dew points…in other words artificially creating too high dew points…this then leads to higher instability (crazy high) and that can contribute to less that accurate model data, especially beyond 18 hours or so…

What does this mean for us…iffy storm chances that will be relying (at least for KC) on outflow from storms that will develop across northern MO later today.

Today: Mostly sunny and hotter with highs in the upper 80s and increasingly more humid weather developing as well. Winds will be increasing from the SW as the day moves along…so sort of a breezy day.

Tonight: Storms are possible in KC…likely this evening in northern MO and perhaps NE KS. Not a set in stone thing for KC Metro though. IF outflow from the northern MO storms doesn’t come towards I-70…we won’t see much of anything locally. There is a severe weather risk for N MO especially after 5PM.

Wednesday: Assuming the storms DON’T come to KC…a repeat of today minus the storm chances. Highs in the upper 80s

Thursday: Partly cloudy and seasonable with highs near 90°

So this is sort of a dicey forecast because we know storms will be forming in northern MO…what we don’t know is whether or not those storms will send outflow this far southwards. That makes our storm prospects in KC a bit murkier. Data today isn’t so convincing that the KC Metro gets storms (at least through 9AM this morning)

The rub is that the storms in N MO may indeed be severe. There is going to be  ton of instability in the region…so what storms form should have a lot of instability to tap in to. This means that areas from near 36 highway northwards could be more in the gusty wind/hail game. There is even a small risk of a tornado towards the IA border as well.

The risks will evolve as the storms potentially become more numerous. The more individual and discrete they are…the more of a wind/hail threat…the more numerous amounts of storms…the threat evolves into winds.

So obviously it’s something to watch…the data late yesterday and last night showed storms that would have a tough time coming southwards…IF there is NO outflow that will be the case.

The though process is that the instability up there is a given.

Here is a look at the overnight data showing CAPES or Convective Available Potential Energy The higher the CAPE the more instability present. Values over 1500 are somewhat noteworthy…values over 3000 are impressive. It’s not unusual to have high CAPES during this time of the year with the heat and humidity in the region. This map is for 4PM today…via Pivotal Weather 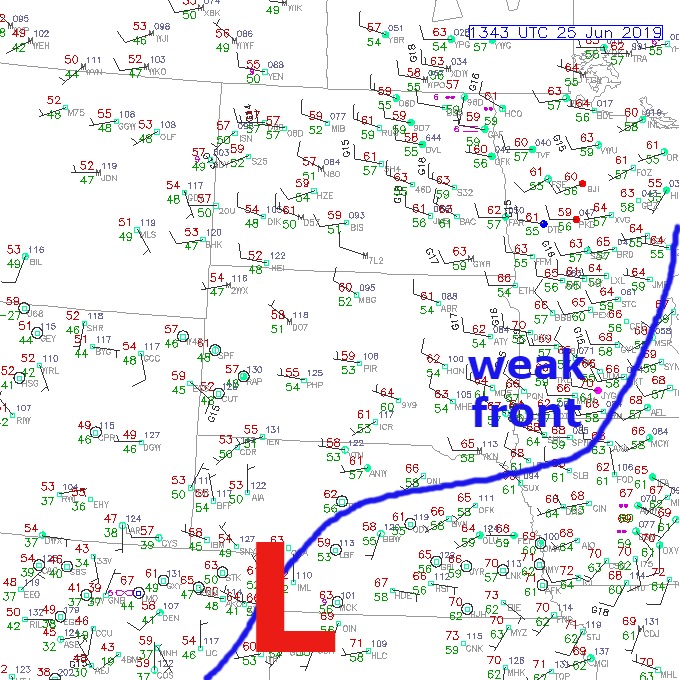 So there are a few issues that need to be overcome…1) is that their isn’t a lot of “convergence” along the front…winds are out of the SW ahead of the front and are from the west behind the front. The air isn’t exactly “colliding”…that may change a bit later today…and it won’t take much of a spark…but this might be one reason why the data this morning isn’t exactly being generous for storms toward the I-70 corridor region. 2) the dew points really need to come up for more coverage of the storms. Model data does show this happening…but I’ve been noticing some talk within the weather community about how the models may be having issues right now because they think the dew points are higher because of all the “typical” agricultural growth that “should” have happened already…but because of such poop weather hasn’t.

This morning the dew points are 70+ south of KC…we should get to there later today and this evening. 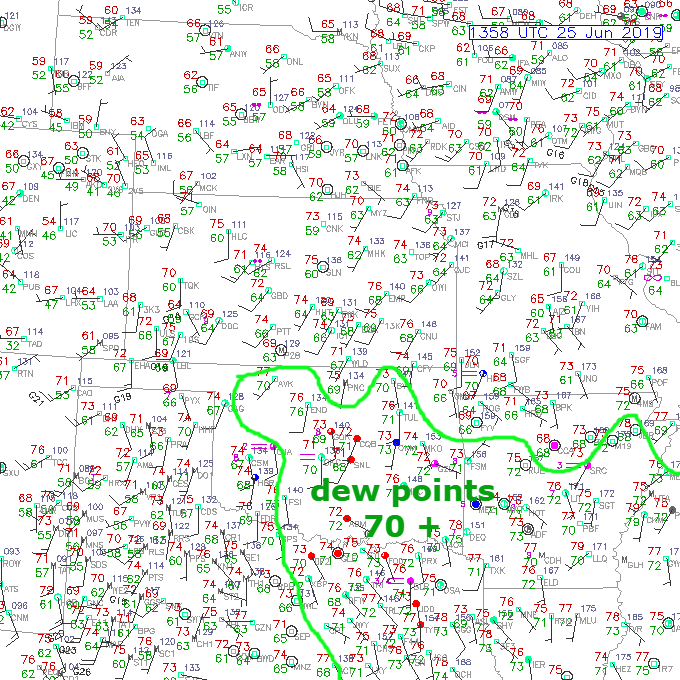 Last night some model data had 70-75 dew points widespread and everywhere…we’ll see IF that was too generous. Already the HRRR data has dew points closer to 70°…that’s an important consideration when looking at what could happen.

Regardless for KC…storms may not be a factor till after 9PM or so…and the later we go into the overnight the instability will start to wane so a LOT needs to happen before 10PM…otherwise I could see KC not getting much from this.

Not to say it won’t happen but there are cautionary flags waving out there if you get into the data. Again IF there is NO outflow…there probably won’t be storms locally in the KC Metro tonight.

It’s worth monitoring BUT NOT worth cancelling your KC Metro evening plans.

Finally a couple of graphics that I talked about on the news yesterday. The first one concerns the crazy lake levels compared to average for some of the area lakes… 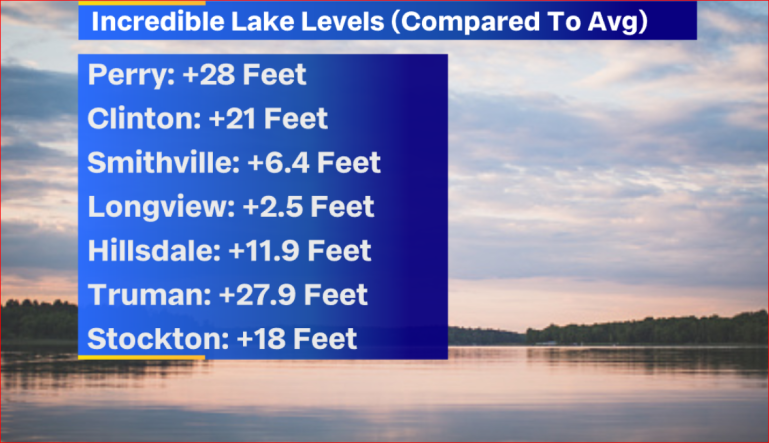 This next one concerns out ranking in 130 years of weather records for KC…regarding precipitation…going back to October 1st…January 1st and May 1st. 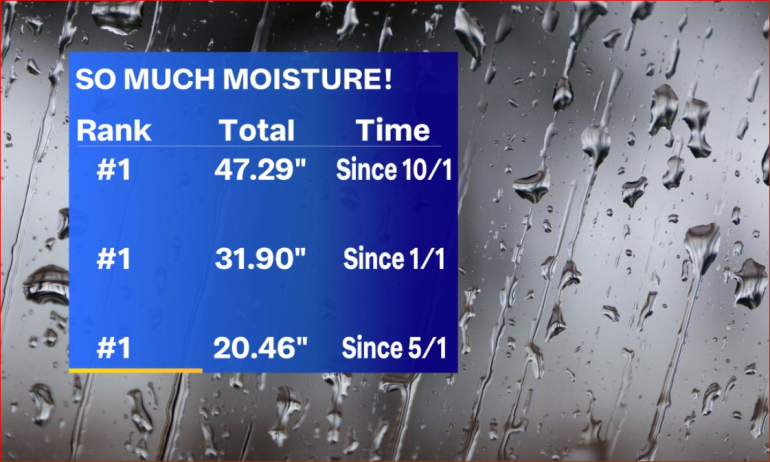 We are transitioning to a somewhat drier pattern it appears over the next 10 days with more irregular rains.

Our feature photo comes from Walter Bauer‎ up towards Smithville Lake…not as high as the others but still elevated. 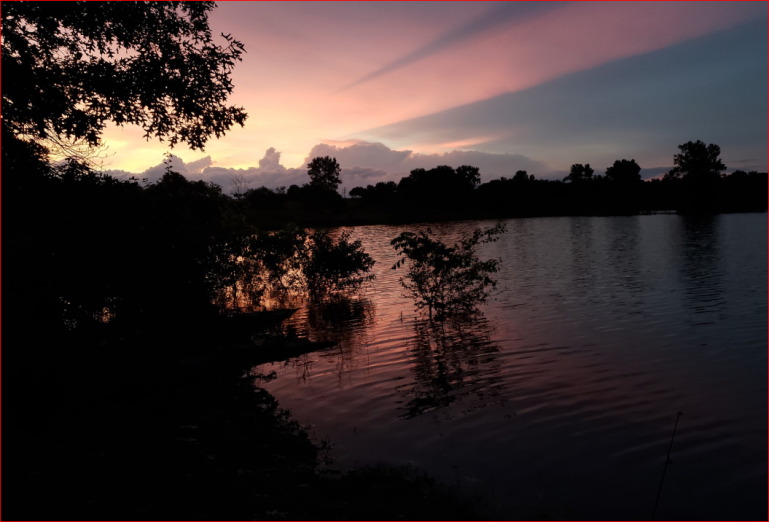