A muddled atmospheric set-up for today and by no means is this a tremendous severe weather set-up for the KC area. There are some well if this than that stuff that we need to watch and I will be doing that this afternoon…but this remains, to me at least, very muddled and not clear cut at all for KC. It’s pretty rare that we have all this convection and a worked over atmosphere in the morning and then get unstable enough in the afternoon to have a lot of severe weather. History can be a telling thing in this case. On top of all that there really isn’t a strong wave coming this way to get the atmosphere fired up locally as well. It’s still worth paying attention too and part of the region is more suspect than another part of the region…more on that in the discussion.

Today: Rain/storms this morning…there may be some gaps in the rain this afternoon. Additional storms later today and this evening moving away. There may be some hail with those later afternoon/early evening storms. Highs will be 60-65°.

Tonight: Storms move away as we stabilize and cool down a bit. Lows near 50°

Wednesday: Not a lot during the day…clouds with highs in the 60s. More storms are possible Wednesday night with another opportunity of some severe weather.

Thursday: Lingering showers (light) in the morning that will be ending. It will be a close call for School Day. Hopefully the “luck” of the School Day show will continue for another year. Highs into the 60s

It actually takes a lot for the KC area to get widespread severe weather. Today is one of those days I think some are trying too hard to “make” this happen. It’s a very muddled set-up and while it can’t be ruled out…I think the “overall” look to things favors areas about 3 counties south more than the KC Metro at this point…as we know things can change and it will be watched carefully but it just seems like when you keep looking for different reasons to try and validate a forecast things usually don’t work out.

The bottom line right now at least (as of 8AM) is to be mindful of the situation but don’t alter any plans that you may have, unless they’re outdoor plans!

The radar this morning is a mess of rain and storms. There is a wave moving towards the south of the Metro which is in the process of working over areas farther south of KC this morning.

The rain will start to lighten up a bit in the KC area as the morning unfolds but clouds are likely to linger for a good part of the day.

There are other waves already developing towards southern KS moving towards the NE.

So when it does lighten up or even stops it may not last for too long as additional rains may come up from the southwest.

With all this rain happening…obviously there is a flash flood watch in effect for most of the region.

Doppler data from yesterday afternoon through today shows decent rains in the region.

Some areas are near 1.5″ since then which combined with what happened on Sunday puts some areas over 3″ with more coming.

The forecast from early last week of 2-6″+ for this week is verifying nicely.

As far as today goes…the morning update via SPC (Storm Prediction Center) shows that the higher risks are farther south. We talked about this last night when I was trying to indicate that the data was showing the higher risks (mainly of any potential tornadoes) south of a Sedalia to Pleasanton, KS line…

Now does that mean we won’t have some severe weather in KC? No. I wouldn’t be surprised if perhaps there are some hail producing storms locally later today. The tornado risk though seems very murky as does the higher wind risks for the Metro.

Let’s be vigilant for changes but that’s the way things look to me right now at least.

The 8AM surface map shows a stationary front towards the south of KC…actually it might be a moving warm front at this point. With all the rain though and the rain cooled air that’s in the region and an absence of any strong wave coming up from the southwest…that front is really going to struggle to push that far northwards. 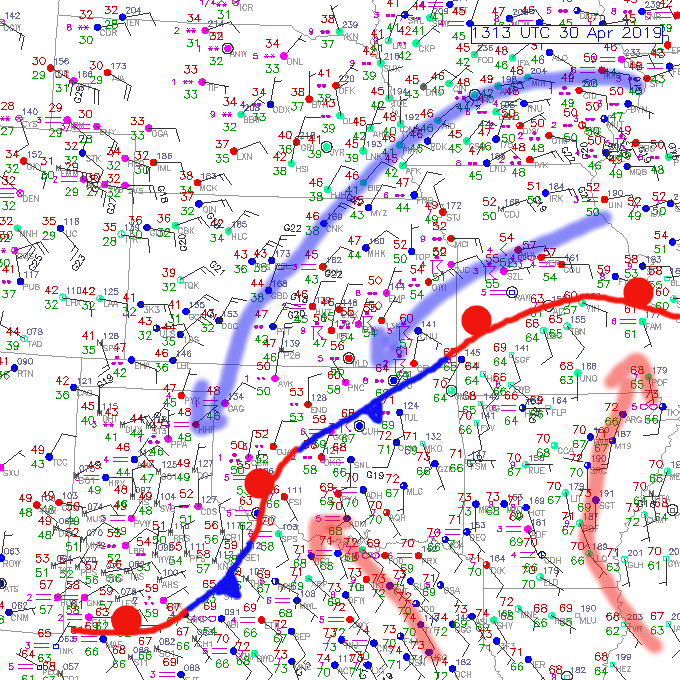 The area that should remain vigilant for stronger storms is down south…perhaps from near Warsaw to Clinton to Garnett and southwards. That area, if things get more unstable could get something a little stronger. I also want to watch the progress of that front which should some northwards at least a little today.

So there are certainly things to watch but again it’s not a screaming set-up for severe storms that are noteworthy for the KC Metro area…let’s watch the hail situation later today though…sometimes you can get some pretty big hailstones with the right storm evolution. Here is the HRRR model that should update automatically showing the possible playout of the day with the rain situation..

The time period to watch for possible hail in KC appears to be later this afternoon…from about 5PM-8PM or so. That, to me at least, is the main severe weather threat for the Metro, aside from flooding. This is during rush hour…so that could be a complicating aspect of the afternoon.

Our feature photo comes from ‎Angela Johnson-Thomas‎  up in Gladstone over the weekend. 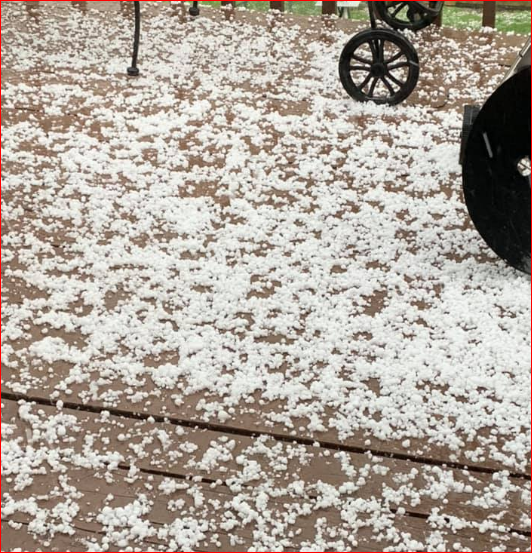 Joe’s Forecast: Watching for storms to start the weekend

Kansas sees 240,000 mail-in ballot requests, more than ever before

Opioid overdose deaths decrease in Missouri for first time since 2015