KANSAS CITY- It was bound to happen eventually: After a really warm winter season so far, our first winter storm of the year is going to get everyone’s attention in Kansas City.

First and foremost, if you have New Year’s Eve plans, I don’t expect the weather to impact you. While temperatures will be significantly colder as you ring in the New Year, precipitation should hold off until 3 AM.

As temperatures fall, there will be a warmer layer of air a few thousand feet above the surface. That will add a wintry mix of precipitation to the fold to begin this winter storm. Rain, freezing rain, and sleet will all mix in to start before the full transition to snow later in the morning.

Areas south and east of I-35 should really prepare for a bit more of a mix of freezing rain and sleet before the full transition to snow. That’s why snow totals will be on the lighter side there.

But that doesn’t mean there won’t be significant impacts! Look at temperatures falling into the 20s and 10s very quickly. Any liquid a the surface will freeze rapidly. This “Flash Freeze” will make travel extremely difficult during the day Saturday.

Snow continues for most us as the wind picks up and blows it around as well. With temperatures in the single digits and blowing snow, the roadways will have a difficult time being fully clear as it’s actively snowing most of Saturday. 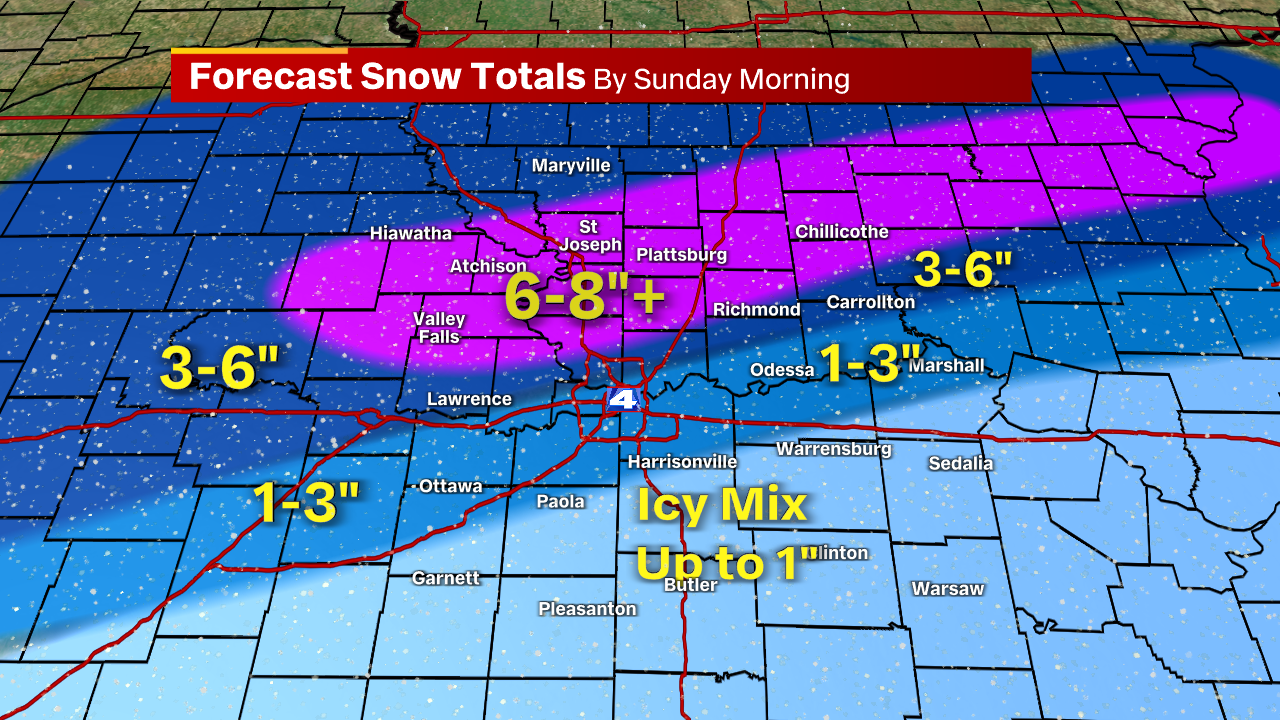 Let’s break down the snowfall total map for you from south to north so you can get a good grasp on what to expect during the day Saturday. Because we have more of that wintry mix of freezing rain, sleet, and snow early on, there won’t be as much snow overall.

That doesn’t mean the impacts will be felt any less than those north of the river. A higher swath of heavy snow will be expected in areas north of the river as the transition to snow is much quicker. 6-8 inches of snow expected area wide with a few isolated totals over 10 inches are possible as well!

Once the snow is gone, the frigid air settles in! Wind chills as low as -20 are possible in some areas early Sunday morning.

We’ll keep you posted on any changes to snowfall totals and expected times, but prepare for a wintry day on Saturday.

How recent weather will affect fall foliage in MO

KU fans excited after 4-0 start to the season

Fall festivals in the Kansas City area you won’t …

New funding brings back the music at Kansas City …

Residents at KCK apartment complex fed up with years …